“Richard, if you’ll help me carry this cat litter up the stairs to my apartment, I’ll fix you dinner and we’ll blow bubbles on the balcony for dessert,” I said smiling and pointing to one of the two thirty gallon buckets of kitty litter on the ground next to my car.

Richard looked from me down to the buckets then at the two flights of stairs to my apartment. Running his fingers through his thick brown hair he smiled.

“Genuine soap bubbles like you played with as a kid,” I said flashing my most winning smile and batting my green eyes at him, “so are you in?”

“Thank you, otherwise it takes me two trips to get these up the stairs.”

When I opened the door to my apartment, two orange cats sat five feet from the door staring at us. Wicket looked from me to Richard and bellowed.

“I’m not convinced he likes me,” Richard said looking at the cat.

“He hasn’t gotten to know you very well yet,” I said putting the bucket in the coat closet. “Once you’ve spent more time together, you’ll grow on each other.”

“Spoken like a true cat person,” he said handing me the other bucket.

“Let me feed them, then I’ll feed us,” I said walking to the kitchen, the cats falling in behind like little ducklings.

“Do what?” I asked looking around.

“They know I’m going to feed them, they have an incentive,” I said. “Wait until we pull out the bubbles.”

Wicket and Sadie followed me into the kitchen and sat by their bowls. Richard watched from the living room. I put food in their bowls, patted each one on their head and said, “okay.”

They dove into their bowls like vultures on a carcass.

“You sure they’re not dogs?”

“Trust me, they have me trained and not the other way around,” I said smiling. “It’s their evil plan to make you think they’re innocent and obedient. However, once you’ve convinced Sadie you like cats, Wicket will come around.”

“If you say so,” he said watching the two cats twitch their tails in unison as they ate.

The smell of garlic, thyme and chicken filled the air as the food simmered on the stove. I set the table. The cats positioned themselves between Richard and the kitchen. Richard sat in the living room watching the cats.

“You know,” I said looking from him to the cats, “you might want to consider ignoring them.”

“I don’t think that would be safe,” he said.

“We’ve got a few minutes before dinner, why don’t we play with them to break the tension,” I said pulling a bottle of bubbles from the kitchen cupboard.

Their heads snapped around. They raced to my feet. Whining and rubbing up against my legs, they twisted between my feet as I worked my way toward Richard in the living room.

“What ever you do, do not spill this on anything,” I said, “it’s laced with catnip and Wicket’ll go berserk over any spillage.”

“Got it,” Richard said reaching for the bottle.

“Blow the bubbles over their heads in the direction of the kitchen,” I said watching the cats stare at Richard as though I’d committed a sin.

Richard removed the wand from the bottle. He blew a bubble over Sadie’s head. She leaped up and popped the bubble with both paws. A little bit of bubble solution dripped on Richard’s hiking boot as he held the wand watching the cats.

He dipped the wand and blew again.  Three bubbles left the wand. Another drop of solution dripped from the wand onto his boots.

Wicket stood on his hind feet batting at two of the bubbles.

Sadie chased the third bubble into the kitchen where it landed on her nose and popped. She jerked her head back and blinked her eyes. Shaking her head she sat for a moment.

Wicket popped one of the bubbles. The other bubble floated toward Richard. The cat’s eyes dilated. His hind feet winding up to launch.

“Richard, quick, blow the bubble away from you or you’ll get shredded.”

Richard blew the bubble. Wicket launched himself at the bubble, twisting in mid air as it sailed over his head. He landed on Richard’s boots. He froze for a moment sniffing the air then ran after the bubble, catching it before it landed on the carpet.

Richard continued to blow bubbles for the cats until I served dinner.

Wicket walked around the living room sniffing the carpet. He rolled on the carpet where ever a bubble burst. By the time we finished dinner he half dozed next to the sofa. Sadie curled up on a pillow above him.

“If you’re not all bubbled out, I’ve got regular bubbles we can take out on the deck,” I said putting the dishes in the dishwasher.

“Why not,” Richard said handing me the last dish.

We walked out onto the deck. The sun, sinking toward the Olympics, sparkled on the waters of the Puget Sound. Two seagulls flew passed on a warm breeze as we settled into the deck chairs. A few clouds hovered over the horizon.

I blew several bubbles as one of my neighbors drove up the driveway with her daughter. She parked the car below us. Richard and I loaded the wands again and blew. A light breeze caught the bubbles and they drifted farther up the driveway.

My neighbor’s six year old daughter, Samantha, raced out of the car and squealed.

Samantha chased the bubbles all over the parking lot. Squealing with laughter she yelled, “more, more.”

Richard and I laughed and blew more bubbles.

She jumped up and down, clapped her hands and laughed from her toes. Her eyes sparkled. Even her mom chased a few of the bubbles.

Richard looked at me and said, “we have to do this again. How about tomorrow?”

The next evening at 6 p.m. on the nanosecond, my door bell rang. I opened the door. Richard stood in the doorway holding two large overfilled Toys R Us bags.

Taking one of the bags from him I asked, “What’s this?”

“I didn’t think we’d have enough bubbles, so I bought a couple gallons,” he said, his blue eyes twinkling. “Then I found the aisle with a bubble machine, pans, gigantic wands and a every other imaginable bubble blowing thing. I couldn’t stop myself.”

“Oh my god, Richard, this is too funny, ” I said laughing.

We carried the bags out onto the deck. Richard unpacked the bags while I finalized dinner.

The cats walked out onto the deck and inspected every item. Wicket paused to sniff Richard’s boots. In the blink of an eye, he grabbed an empty bag and ran for the apartment. Sadie chased him. The bag billowed over his head. It caught on the screen door jerking him to a halt. She skid into his backside. Wicket released the bag as they both rolled into the kitchen crashing into a chair. Fur flying, they ran for the bedroom.

“Well, I guess we won’t see them for a little while,” I said laughing and straightening out the chair.

“What do you suppose got into them?” Richard asked watching them disappear into the bedroom.

“Cats and bags are a match made in heaven.”

By the time we finished dinner both cats sat on the sofa watching us.

“Do you want to blow more bubbles for the cats while I clean up the kitchen?” I asked reaching for the cupboard with the bubbles.

Both cats heads perked up.

Handing him the bottle, both cats leaped off the sofa and watched Richard walk into the room. Sadie rubbed against his leg and squeaked her version of a meow. Richard sat on the sofa. He fished the wand from the bottle. A few drops of solution dripped to his boots before he blew the first bubbles.

I finished the dishes as the cats raced over each other for the bubbles. When I walked into the living room, Richard reloaded the wand. With his legs spread apart and the soles of his boots facing each other a big drip fell from his wand to the sole of his boot.

Wicket’s eyes dilated. He hugged the ground, ignoring the bubbles floating over his head. He crawled on his belly. Pausing for a moment, he launched himself at Richard’s boot, sinking his teeth into the sole.

“Richard, don’t move, I’ve got to get a picture of this,” I said running into the bedroom for the camera.

“Can you lift your leg?” I asked focusing the camera on the cat.

Wicket hung onto the boot sinking his teeth further into the sole as Richard lifted his leg. 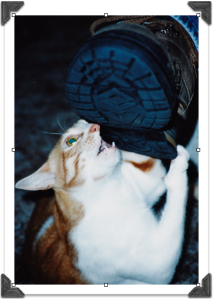 “Fannie, I can’t walk around with a cat attached to my boot,” he said laughing moving his foot and the cat back and forth.

“If you don’t mind, take your boot off.  He will wear himself out and fall asleep before he can do any real damage.”

Richard removed both boots and put them on the floor. 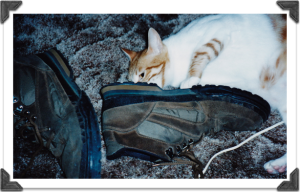 Wicket rolled around with the boot for a few minutes rubbing his head against it. He curled up nose first into the heel of Richard’s boot and drifted off.

“I wouldn’t of believed that if I hadn’t seen it myself,” Richard said shaking his head. “Cats.”

“Shall we go try out your bubble machine?”

Richard set the bubble machine on the corner of the deck. He filled it full of solution. Screwing the cap on tight he pressed the power button. Tiny bubbles poured from the deck filling the parking lot below.

Richard said with his best German accent, “And uh one and uh two”.

Several of my neighbors came out onto their balconies to watch.

We heard a door slam somewhere above us followed by the thudding of tiny feet racing down three flights of stair to the parking lot. Followed by a louder pair of feet and a muffled voice saying, “slow down, they won’t stop before you get there.”

Samantha ran into the driveway. She squealed and jumped up and down popping as many bubbles as she could catch.

Richard handed me the giant bubble wand and a pan filled with solution.

A light breeze picked up, helping me blow a five foot long bubble.

Five tenants from the first floor joined Samantha and her mother in the parking lot chasing bubbles.

I heard the sound of the sliding glass door open from the balcony above ours. Followed by a female voice saying, “hey guys out here, you gotta see this.”

We could hear some feet scuffing above our heads. I looked. My up stairs neighbor and some friends stared down at us.

“Hey, Fannie, looks like you’re having some fun,” Sarah said, “mind if we play some music to accompany you.”

Richard looked at me. I mouthed, ‘violinist, Seattle Symphony’.

I could hear a male voice above us say, “one, two, three.”

Instead of the violins we expected to hear, we heard a guitar playing. Three voices sang in chorus, “Tiny bubbles, in the wine, make me happy, make me feel fine. . .”

Writing since she could first hold a pen, Tracy Perkins formed her alter ego, "Fannie Cranium" at the suggestion of her husband. Tracy understands smiling makes people wonder what she’s been up to.
View all posts by Fannie Cranium →
This entry was posted in Cats, Humor and tagged bubbles, Cats, Don Ho, Lawrence Welk, Orange Cats, Seattle Symphony. Bookmark the permalink.