Salman Khan–this month’s contribution to the Blog of Funny Names.

The Blog of Funny Names

We recently had a run on twins here at the BoFN. How about twined names.

What’s in a name? A lot if your name is Salman Khan.

If you Google Salman Khan, the first name to rise to the top is Bollywood actor, writer, director, producer, Salman Khan. The man appeared in the top grossing Indian films for nine consecutive years. A feat not yet repeated. 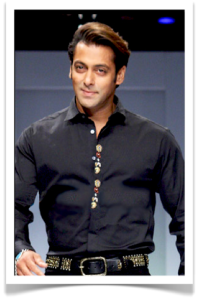 He won the Filmfare Award—India’s version of the Oscars—for Best Supporting Actor for his extended guest role in the 1998 Kuch Kuch Hota Hai. I can’t help myself, I have to repeat that off stage several times . . . okay, I’m better now.

By 1995 he starred in Hum Aapke Hain Koun..!. The film becoming a worldwide hit, garnering $21 million US. And landing on the “Biggest Blockbusters Ever in Hindi Cinema” list…

Writing since she could first hold a pen, Tracy Perkins formed her alter ego, "Fannie Cranium" at the suggestion of her husband. Tracy understands smiling makes people wonder what she’s been up to.
View all posts by Fannie Cranium →
This entry was posted in Uncategorized. Bookmark the permalink.